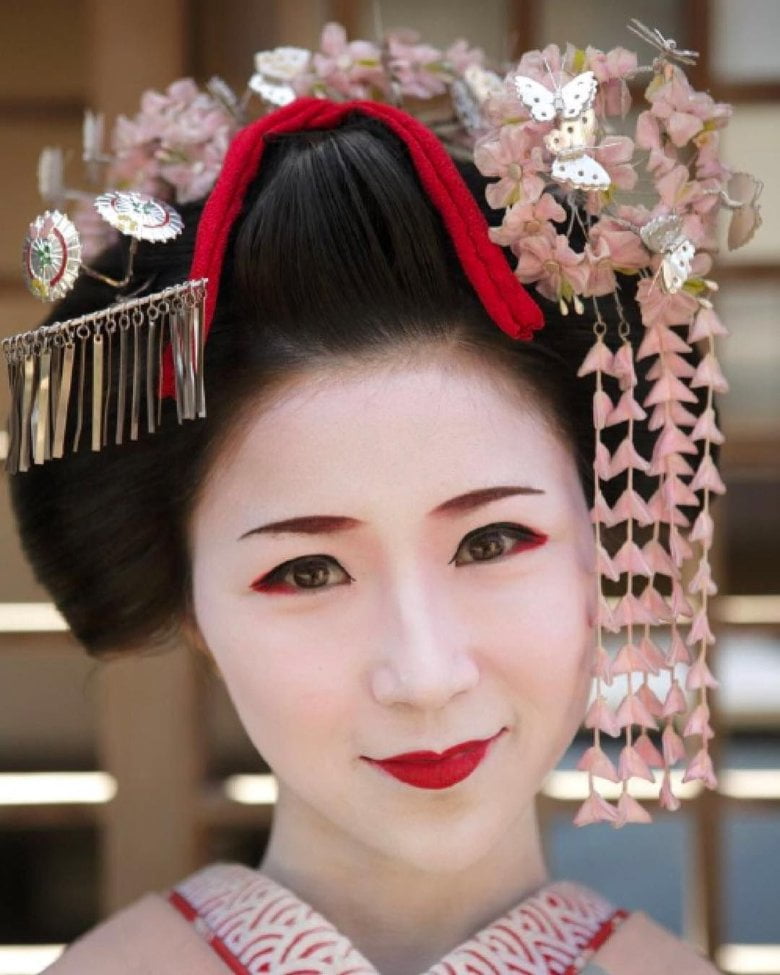 The Geisha hairstyle is a traditional Japanese hairstyle that has been around for centuries. It is often associated with the elegant, mysterious and graceful geishas of Japan. The Geisha hairstyle features an intricate updo with long bangs that frame the face. It also includes a variety of accessories such as combs, pins and ribbons to help secure the style in place. The traditional female Geisha hairstyle is an important part of their cultural identity and continues to be popular among modern women who want to add a touch of elegance to their look.

The Maiko hairstyle is a traditional Japanese hairstyle for women. It is characterized by its intricate design and intricate styling, which requires special techniques to achieve the desired look. This hairstyle was traditionally worn by young female entertainers in Japan known as maiko, and has since become popular among modern Japanese women. It is often seen in television shows, movies, and fashion magazines. The Maiko hairstyle is a beautiful way to express your unique style and personality while still honoring traditional Japanese culture.

The traditional Japanese hairstyle for girls is known as Katsuyama, which originates from the Heian period (794-1185). This style features a long, center-parted ponytail with two side braids that are tied together at the bottom. It’s characterized by an intricate knotting pattern created along both sides of the head, using various types of ribbons and cords to secure it in place. The look is finished off with decorative hairpins or combs placed strategically around the face and neck area. Katsuyama was initially popularized during Japan’s Edo period (1603–1868) but has since been embraced by modern times due to its classic beauty and elegance. Many young women opt for this timeless hairstyle during special occasions such as weddings or other formal events. Not only does it give them an extra touch of sophistication but also serves as a way to express their connection with Japanese culture and traditions.

The Kimono Hairdo is another traditional Japanese hairstyle for girls that dates back to the Edo period. It’s characterized by long, straight hair that is gathered at the nape of the neck and then secured with a band or ribbon. Popularized during this time as an accessory to women’s kimonos, it gives off a refined look while also being easy to style and maintain. Although some people opt for wigs when creating this hairstyle due to its simplicity, many young women today choose silk ribbons instead as they provide more flexibility in styling options. Whether you’re wearing your hair down or up, adding a touch of color can really bring out its beauty! No matter what variation you decide on, one thing remains certain: The Kimono Hairdo will never go out of fashion!

The name of Oiran’s hairdo is date-hyougo. Six to eight hairpins are positioned in three large knots on the head’s middle, left, and right sides. This might be 10 kilogrammes in weight.

The Kimono Siromuku Hairstyle is a traditional Japanese hairstyle that has been around for centuries. This hairstyle is often seen in traditional Japanese weddings and other formal occasions. It is characterized by its simplicity and elegance, making it the perfect choice for those looking to add a touch of sophistication to their look. The style consists of a low bun with two long locks of hair framing the face, giving it an elegant yet understated look. Women who prefer a more modern look can accessorize this hairstyle with accessories such as hairpins or ribbons. With its timeless appeal, the Kimono Siromuku Hairstyle will continue to be popular among women in Japan and across the world for years to come.

The Misedasi Varesinobu hairstyle is a traditional Japanese hairstyle that has been around for centuries. It is characterized by its long, straight locks of hair that are parted in the middle and held in place with two sticks. This style was popular among women during the Edo period and continues to be popular today. It is an elegant look that can be dressed up or down depending on the occasion. The Misedasi Varesinobu hairstyle is a timeless look that will never go out of style.

Shimada Mega Hairstyle is a traditional Japanese hairstyle that has been around for centuries. It is characterized by its long, sleek, and voluminous look. It has become increasingly popular in recent years due to its timeless yet modern appeal.

This traditional Japanese hairstyle can be worn by both men and women, though it is most commonly seen on women. For women, the style involves long hair being pulled up into a bun or ponytail at the crown of the head and then secured with decorative pins or combs. The length of the hair can vary depending on personal preference, but it should always remain sleek and smooth.Shimada Mega Hairstyle is an elegant way to showcase your unique style while still paying homage to traditional Japanese culture. With its timeless appeal, it’s no wonder why this iconic look continues to be popular today!

The Matsuri hairstyle is a traditional Japanese hairstyle for women that has been around for centuries. It is characterized by its long, flowing locks and intricate braiding. The style is often seen in festivals and other special occasions. It has become popular among modern women due to its unique look and versatility. This article will explore the history of the Matsuri hairstyle, its cultural significance, and how to achieve the look in modern times.

The Suihatsu Taregami hairstyle is a traditional Japanese hairstyle that has been around for centuries. It is typically worn by women of all ages, and it is a style that has been passed down through generations. The style features long, flowing locks that are usually tied up in ponytail at the back of the head. It is an elegant look that can be dressed up or down depending on the occasion. This timeless hairstyle has remained popular throughout the years and continues to be an iconic part of traditional Japanese culture.

The traditional Japanese female hairstyle has been an important part of the country’s culture and identity for centuries. It continues to be a popular choice among many women in Japan, both as a way to express their sense of style and as an homage to their traditions. Whether you are looking for something special for a formal occasion or just want to try something different, this article has provided all the information necessary on styling a beautiful, timeless Japanese feminine hairdo. From selecting the right accessories to achieving the perfect look, learning how to style a traditional Japanese female hairstyle is easy with these tips. In addition to being stylish and classic, there is also significance behind wearing such elaborate styles in Japan. For example, it was believed that long hair would protect against bad luck or evil spirits while shorter hair symbolized purity and innocence. Other cultural associations include beauty and femininity as well as strength during times of hardship or struggle. Finally, it’s important not only to understand how to create these looks but also appreciate their history and importance within Japanese culture today. Wearing traditional hairstyles can be seen as honoring one’s ancestors or conveying respect towards others by adhering to certain customs that have been passed down throughout generations in Japan Hairstyles have one thing going for them—there is something for everyone. When it comes to hair style or getting a haircut, nobody will be left out. If a person wants a certain hairstyle but it doesn’t yet exist, they can be the first to wear it and it will soon become popular. There are ideal… Finding the ideal tux, finding shoes that fit perfectly, and determining whether to wear a pocket square are just a few of the numerous details that go into pulling off a wedding. But it’s crucial to keep in mind not to be sidetracked by those particulars and to concentrate on another crucial element—your wedding day… 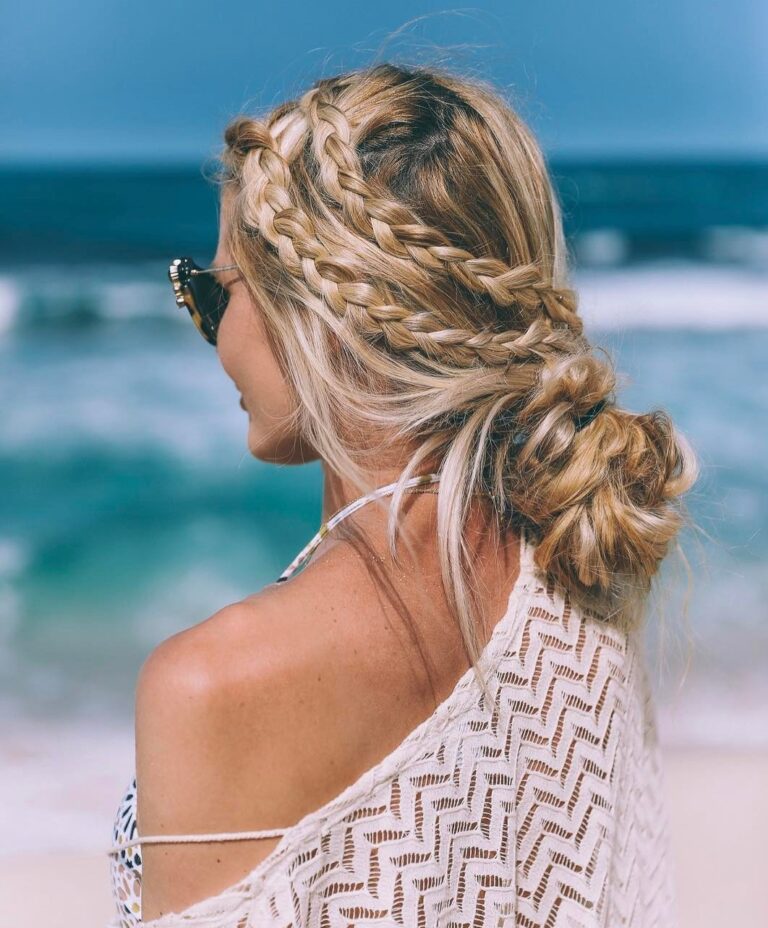 From beachy waves to braided crowns, there are plenty of ways to get a beautiful and effortless look for the summer. Whether you have thin or thick hair, straight or curly, this blog article has something for everyone. Get ready to catch waves and compliments with these stunning beach hairstyle ideas! Curly Hair Styles for… Your entire appearance can change with a new hair colour. Take a hint from Jimin’s hair if you need some inspiration. Jimin’s hair has experienced a number of changes throughout the years, including vibrant and fashionable hair colours as well as hip Kpop hairstyles and haircuts. See them listed below. 1. Ash Brown Two-Block Haircut… 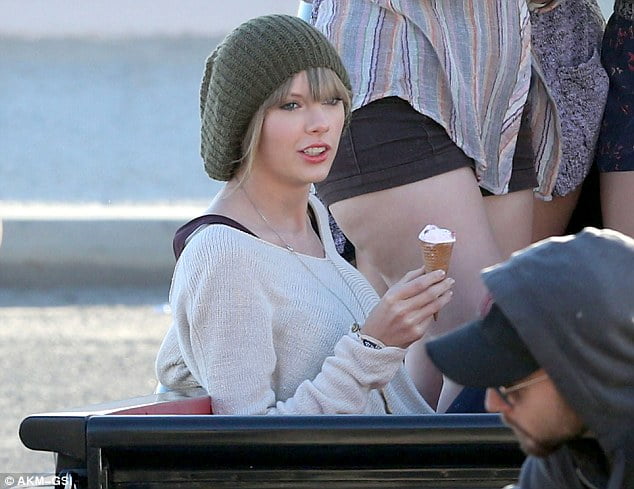 In recent years, Taylor Swift has gone through many different hairstyles. From the long, straight hair of her early days to the wavy locks she sported during her “Blank Space” era, there is no doubt that the singer is always looking for the next trend. In this blog post, we will take a look at… 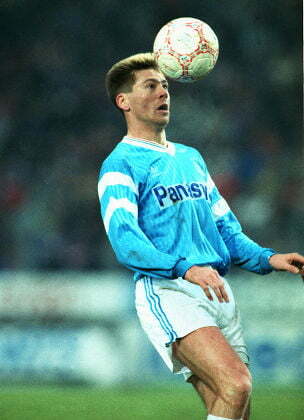 Ronaldo’s triangle, Chris Waddle’s mullet, and Romania’s Slim Shady homage act are just a few of the questionable hairstyles that have appeared in the World Cup over the years. Great goals are scored, amazing matches are played, and terrible hairstyles are made fun of on Twitter during the World Cup. Fortunately for the first Ronaldo,…